Velvet characterizes the fuzzy stage of antler growth, typically seen in the late spring, before antlers begin to harden. It is called velvet because that is how the antlers look, soft and fuzzy. 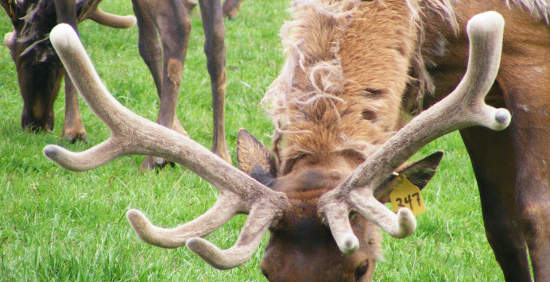 Deer antler supplements are derived from the immature antlers of male members of the deer family (Cervisae family; moose, caribou, deer, elk).
In North America, velvet antler is usually obtained from the elk species Cervus canadensis, also known as Wapiti.
Each spring, antlers are dropped and a new set is grown. Antlers grow approximately 1-2 cm in length per day and reach full maturity in approximately 12-14 weeks.
Velvet antlers are removed after approximately 8 weeks of growth when they are still immature and have not yet been fully calcified.

They consist of cartilage and bone that is supplied with sensory nerves and blood vessels and is enclosed by an outer skin or velvet.
Our Velvet Antler is freeze dried, skinned, and ground into a powder, which is then processed further into gel capsules and liquid extracts.
Values calculated for the skinned whole antler were 31% for dry matter, 57% for protein, and 39% for ash (minerals). Study shows that Chondroitin Sulfate is the major Glycosaminoglycan in wapiti antler.
In addition to collagen and glycosaminoglycan contents, those of lipid, sialic acid, tyrosine, isoleucine and C18:306 fatty acid are found. [1]
Collagen is a major protein in velvet antler and numerous researchers have demonstrated that the growth plate of velvet antler contains collagen type II, IX and XI.
It has been reported that aspartic acid, glutamic acid, proline, glycine and arginine are the predominant amino acids in velvet antler, and account for approximately 32.5-37.2% of the total amino acids.[2]